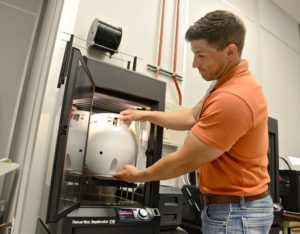 Three-dimensional printing is becoming more prevalent in the defense industry, as engineers explore the process to make parts for the most sophisticated U.S. weapons, such as intercontinental ballistic missiles.

But lesser-known projects have been in the works at a Tinker Air Force Base, Oklahoma, shop that has been producing parts for Air Force aircraft for at least two years.

In February, Lt. Gen. John Cooper, deputy chief of staff for logistics, engineering and force protection, asked audiences at an Air Force Association breakfast, “Can we find better ways to maintain these airplanes? Is there some new technology that can help us? Or some new repair processes?”

The 3-D printing process is one way to do that, he said.

The general cited a trip he took to Tinker where he saw members of the Oklahoma City Air Logistics Complex, one of the Air Force’s largest depot maintenance units, making a dashboard casing for a B-1B Lancer bomber.

“We’re responsible for all the maintenance, repair and overhaul of all components that come off the aircraft,” Col. Robert Jackson, commander 76th Commodities Maintenance Group, told Military.com in a recent interview. The CMXG is part of the Oklahoma City Air Logistics Complex. Read more….