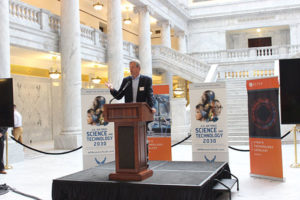 The reception was held prior to an Air Force Science and Technology 2030 Initiative workshop hosted by the University of Utah on July 11.

As part of this effort in Utah, USTAR and the University of Utah assisted the Air Force Research Lab (AFRL) in reaching out to researchers, entrepreneurs, scientists and technologists to engage in conversations designed to find new scientific researchers and industry partners to help the Air Force invent the technologies that can play a role in the United States’ national security and defense in the future. Read more…..