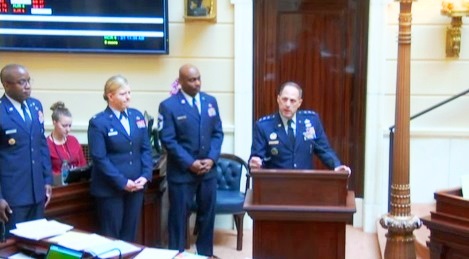 During Lt. General Levy’s remarks to the Utah Senate, he expressed his thanks for support of Hill Air Force Base and associated aerospace programs.  He particularly praised the senators for their support of the STEM program, the new USTAR Innovation Lab near HAFB, and the creation UAMMI, stating, “What a great contribution the state has made to our collective defense through these programs.”

After highlighting successes, Lt. General Levy also asked for continued support of Hill Air Force Base and the 22,000 people it employs within the state.

Founded in 2014, and initially funded by the state of Utah, the Utah Advanced Materials and Manufacturing Initiative (UAMMI) brings together public, private, community, industry and education partners to assure growth and sustainability of Utah’s advanced materials and manufacturing industry and maintain Utah’s leadership in this key global industry.