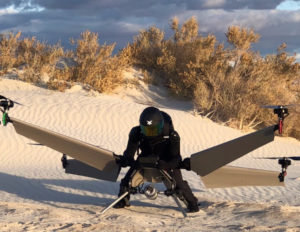 A small band of innovators from Utah is developing a new take on a personal flying machine- so new it has never before been seen outside of its creator’s shop until now.

The prototype sat at the far end of the exhibit hall at InterDrone, billed as North America’s biggest drone show, demanding explanation even as it attracted a steady stream of curious onlookers, a few posing for selfies in front of John Manning’s brainchild.

“We call this the Model T on the way to a Ferrari,” said Manning, who began work on the Electrafly in May 2017 in Salt Lake City, Utah, and assembled a small team including a patent attorney to help develop a unique blend of aviation concepts into a personal air vehicle best described as a motorcycle with no wheels, four wings, four electric motors turning propellers, and a turbojet engine to supply a combination of thrust and electric power.

“You don’t really need pilot skills to fly it,” Manning added. Indeed, there were no signs of flight controls—no joysticks, pedals, or even handholds on the prototype that Manning and his crew brought to the drone show. (Handholds, we presume, will be added later.) “Right now, we’ve got the iPad.” 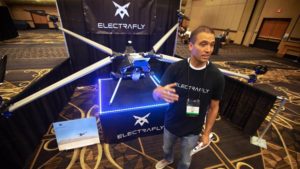 As Manning took a photo of a visitor posing in front of this amalgamation of aviation concepts that was perched on a lighted dais, demanding explanation, Brett Muir, the production manager, described the vision and the design. The turbojet engine mounted below the saddle, pointing downward, is not really there for thrust, Muir said, though it adds a little bit to that equation as it generates electricity to power the four (or, potentially, eight) electric motors and propellers mounted on four arms shaped like airplane wings. The design is optimized for forward flight, with the airfoils generating much of the lift required to keep the craft and rider airborne. It is designed to fly level in forward motion, unlike four-rotor drones that must tilt to create forward motion.

While many designs now being developed for future air taxis and personal air transportation are essentially overgrown drones, relying on the motors for both lift and thrust, incorporating airfoils to provide most of the lift and propellers driven by petroleum-based fuel power to balance the craft in forward flight will make the Electrafly far more efficient, Muir said.  Read more……