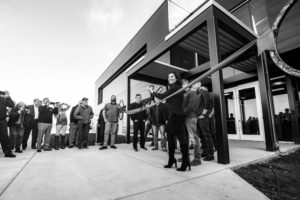 In January 2010, ENVE Composites was in a troublesome state. The Ogden based carbon fiber bike parts manufacturer (then called Edge Composites) was nearly bankrupt, had high product-development costs and faced a long legal battle over a trademark dispute in Europe.  Just when things looked desperate, Sarah Lehman stepped in- the woman who would turn it all around.

Joined by two investors, Sarah and her husband “put everything we owned into the company,” she says.
“We then made a critical decision to stay in the US and not outsource our products overseas, believing that our product quality was critical to success. After that, we stood around… and looked at each other and said, ‘Who’s gonna sell what this week to meet payroll?’ “ 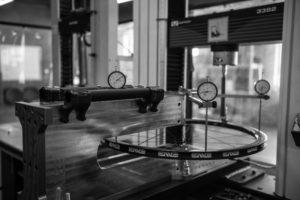 With a background in pharmaceutical and automotive industries, Sarah focused her initial efforts on instituting sound business practices. “Sometimes entrepreneurs get stuck. When you try to pursue everything, nothing is a priority. At some point, you have to choose a few ideas and make them happen,” she says.

To begin, Sarah began stocking products in only one color, thus reducing inventory.  The owners, including her, took no salary. Bike shops were moved to prepayment, rather than extended terms. There was no holiday party, no new office furniture, and no marketing sponsorships.  The results?  Eleven months after Sarah Lehman became CEO, ENVE booked its first profit. Since then, they have experienced substantial revenue and growth.

As ENVE grew, quality became a strong focus. In the beginning, nearly half the wheels ENVE made had to be scrapped for not meeting quality standards.  This made it economically impossible for ENVE to ramp up and boost its top line. 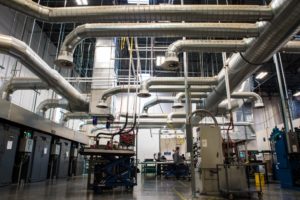 Sarah hired a new director of manufacturing as one of her first moves. The new director relocated operations to a clean room, standardized training, created new quality standards for suppliers, and instituted a maintenance schedule for manufacturing tools. Scrap rates dropped into the single digits and revenue grew. “It’s easy to make one of anything,” Sarah says. “The true test of manufacturing is to make hundreds or thousands of something consistently and reliably.”

As quality increased, demand for ENVE products grew and demand was quickly outpacing their ability to supply.  Existing manufacturing facilities were too small and unconducive to mass production.  “Employees were literally working in closets” says Shane Nishikawa, ENVE Product Manager.  “It was like episodes of The Office, except it was real life. We knew we had to find something different,” he adds.

ENVE began looking for new digs in the Ogden area.  They found what they were looking for in a new development along the Weber River near downtown Ogden.  It was the site of the old Ogden Union Stockyard where livestock were once traded and sold by the thousands and loaded onto trains.  The area had been recently cleared of debris and riff-raff and developed into space for manufacturing and office buildings. 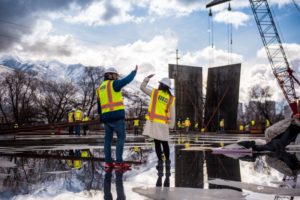 With access to bike trails out their back door, ENVE jumped at the chance and built an 80,000-square-foot facility.  It was built from the ground up and specifically designed for carbon wheel manufacturing. ENVE moved in late 2016, just in time to meet the increased production demands.

The new facility has a full machine shop to make anything from fixtures to molds for each rim. Moving from a batch system in their old building, ENVE now uses a single piece flow methodology which allows manufacturing flexibility. With all the processes in one location, ENVE can focus on just-in-time manufacturing and can handle multiple rim types and designs at the same time. 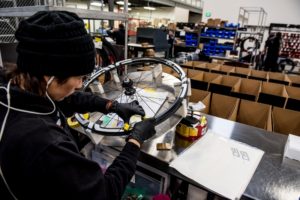 ENVE produces all of its tooling including rim molds, wheel-racking systems, and even the work tables in its facility. It operates six CNC machines, five computer-controlled ovens for curing carbon wheels, a 900-square-foot freezer for storing of its materials (all carbon is stored in-house now), vacuum tables and automated wheel-lacing machines. It also doubled its cut and ply room by expanding from two to four tables. 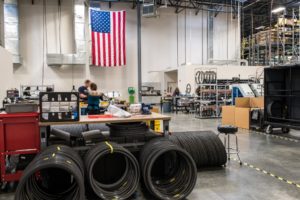 The efficiency of the workflow and expansion of machines and tooling has enabled ENVE to increase production.  They have gone from 220-rim daily production (max) at the old facility to 250 rims per day at the new one. However, “production capacity potential is now as much as four times that, or 1,000 rims per day,” says Jake Pantone, ENVE CMO.

ENVE’s core products are lightweight yet strong carbon fiber bike rims.  They manufacture these wheelsets for triathlon, road, gravel and all mountain bike disciplines. Most recently they launched a wheelset called the SES 4.5 AR which is aerodynamically optimized for higher volume road tires for use on rough and unpaved roads. The average price tag for these wheelsets is a cool $2900 which may be out of reach for many.  However, says Shane Nishikawa, ENVE Product Manager, “We don’t apologize for our prices. We build amazing products with amazing value, made here in the USA.  We stand by our products and when you build a valuable product that people love, they will pay for it.” 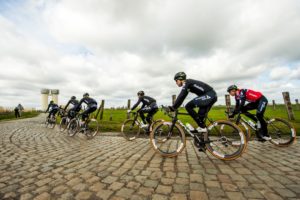 Recently, ENVE was acquired by Amer Sports, also in Ogden, which is the parent company of brands including Wilson, Louisville Slugger, Precor, Salomon, Atomic, Suunto, Arc’teryx and Mavic, which is another aftermarket bike company with a similar product lines as ENVE.  During the acquisition, Mavic was moved under the ENVE roof and the two now share sales, customer service, dealer support and warranty teams.  The acquisition has also allowed them to accelerate into European markets through AmerSports established distribution channels.

ENVE expects to continue strong growth and expansion into new markets.  Their culture is one of innovation and empowerment for teams to make decisions very quickly, thus allowing new ideas to flourish. They envision creating many new game-changing products in the near future.

With all the success since Sarah Lehman took the reins, she now looks back and reflects on the day she took over. “I never doubted we were going to succeed,” she says. “Our founder [Jason Schiers] believed in it, the employees believed in it, and we worked together as a team. We made it happen.” 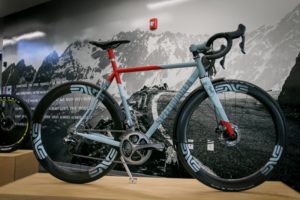 See the video:  ENVE COMPOSITES: US MADE BY CHOICE