Born out of a need to support world war one veterans, Ottobock is a global company with research, design and manufacturing teams based in the beehive state. 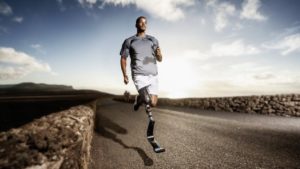 “This year we’re celebrating our 100th year anniversary. The company started in 1919,” says Wall. “the vision of Ottobock was that these products should be made in something that is not 100 percent customized because there was such a strong need after world war ii for prosthesis that they needed to do it more efficiently and so he was the innovator in designing products that could be more mass produced and used more quickly to develop full system products for amputees and that’s how it started in 1919 in berlin, Germany.”

A leader in the prosthetic production industry, Ottobock claims many firsts, including being the first to switch from wood to polyurethane plastics back in the 1950’s.

“We make products for people all over the world, in every country. And we make them for every person, size, weight, activity, so as pediatrics as well as the geriatrics and of course everybody in between. So it can be world-class athletes, but the majority of people who need these devices use them to get their normal life back.”

“Here in Salt Lake City we manufacture carbon fiber feet. We make various models of these feet, including energy responsive, so sometimes when you see olympians, paralympians on tv, they’re using these types of prosthesis.”  Read more…