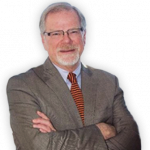 This past week, members of the UAMMI team represented Utah’s advanced materials industry at the CAMX 2017 show in Orlando, Florida and I was proud to be a part of it. Over 6,000 industry members and nearly 500 exhibitors took part in the show.

We had ten Utah companies exhibiting at the show and by all reports, many new business connections were made.  Along with our partners from Davis Tech and the Composites & Aerospace Northern Utah (CANU) organization, UAMMI hosted a “Utah” advanced materials booth to promote our industry and make new friends.  We attracted many visitors and made some great contacts. It didn’t hurt that we gave away free ice cream (Utah has the highest per capita consumption of ice cream in the USA) and awarded a carbon fiber KLOS guitar (made in Provo, Utah) to a lucky winner. 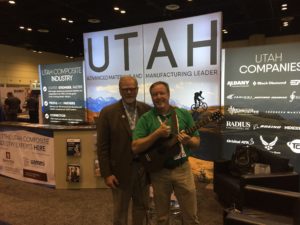 What impressed me most was the disruption that is occurring in our industry. Take for example the expanding use of composites into new industry and market niches. One example that was highlighted was the impact of advanced materials on America’s Cup sailing technology and Utah’s role in it.

In 1992, the America-3 sailing team looked to beat their rival Italian team and take home the prestigious America’s Cup trophy- the most coveted honor in all of team yacht racing.  To do this, they had to completely redesign their boat and make it lighter, stronger, and faster.  In great secrecy, they worked with exclusive partners to develop various parts of the boat out of advanced materials, the promising new material that appeared to meet their needs.

The composite mast was built in Michigan, the rudders built in Maine, and the hull (main body) was built right here in Utah at Hercules Aerospace (since acquired by Orbital ATK).  At the time, the teams CEO Bill Koch said, “We looked around the country for the best composite builder with the biggest oven… and we found Hercules.” 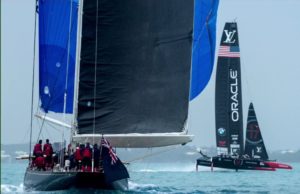 The successful design and manufacturing process led the America-3 team to win the America’s Cup event that year. Their victory was credited to the radical new design which would have been impossible without these new advanced materials which were a huge disruption to the current way of thinking.

That story was mentioned last week by Team USA’s yacht designer Kurt Jordan, at the opening session of CAMX 2017 in Orlando.  The theme of the conference was disruption and how advanced materials do indeed disrupt old ways of doing things.  It was pointed out that for decades, the maximum yacht racing speed was about 10 knots up until the advanced materials disruption.  Since then, yacht speeds have jumped to nearly 45 knots and the boats can actually travel twice the speed of the wind- an amazing accomplishment.

Today there are industries that are poised to be transformed by disruptive new designs and materials. What disruptions will another Utah company make that change an industry? I am confident that Utah will be at the forefront of those changes, just as we have been since that famous boat.

Please take a look at our CAMX website page for pictures and our effort to promote Utah and this industry. Utah is a leader in this space and we are in a great position to be the next big disrupter.