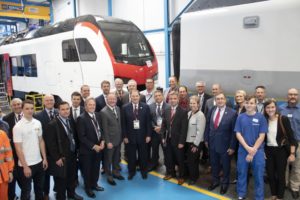 Last Friday, Gov. Herbert visited Stadler Rail’s main facility in Bussneg, Switzerland, where he met with the global leadership of Stadler and saw their efforts to expand and innovate passenger train technology.

He was also able to learn more about how they use work-based learning to train the next generation of workers. Experts in education consider Switzerland to be a model of apprenticeship learning. While at Stadler, he met with a number of high-school aged apprentices who are on a fast-track to high paying technical careers in state-of-the-art manufacturing. It was useful for our team from Talent Ready Utah (Utah’s own work-based learning initiative) to learn how apprenticeships are working in Switzerland.

their commitment to the development of the next generation of manufacturing talent. As we celebrate the 150th anniversary of train history in Utah this year, it is encouraging to see the skill, innovation, and hard work involved in the future of rail travel. Read more……..