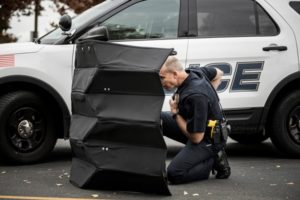 Utah’s Advanced Technology Compliant Solutions recently introduced a true step forward in ballistic protection with the Swift Shield. The patented design is based on origami (the ancient art of paper folding) principles that enable it to collapse down to the size of a notebook for storage. When needed, the Swift Shield instantly unfolds to provide six square-feet of light-weight, NIJ Level IIIA ballistic protection. The shield is being unveiled at the SHOT Show, booth 32009 with strategic partner, AEGIX Global, who will be selling and marketing the Swift Shield into the law enforcement space.

“The world has seen very little practical evolution in body armor since the introduction of Kevlar®, nearly 50 years ago,” said William Benz, President and CEO of ATCS. “According to an FBI study, in recent years, 67 percent of police officers shot and killed in the line of duty were wearing body armor such as a vest when they were killed. This was the motivation behind the development of the Swift Shield because, while vests are necessary, there was something more—something different that was desperately needed. The Swift Shield provides new options to protect those who put their lives on the line in the service of society every day.” 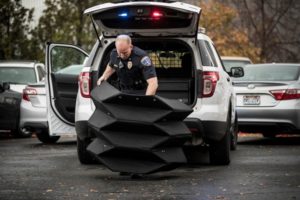 “In a world of active shooters, the Swift Shield represents a new category in personal protection in law enforcement because it is ready to deploy-and-protect any time,” said Chet Linton, CEO of AEGIX Global. “83 percent of officer deaths are in or around their vehicles and the shield offers a new level of protection. Its foldable nature makes it possible to store in an officer’s car door, in between the front seats or backpack. It can be deployed on a windshield, folded in half on top of the trunk or hood of an officer’s vehicle. The tactical applications for the shield are endless.”  Read more…