Good news! Utah’s manufacturers are rebounding from the impacts of the COVID-19 recession thanks to the strong economic base going into the recession.  The report is an update to Using Market Demand to Manage Production Levels COVID-19 Market Demand Analysis and Forecast 1.0, which was released in November 2020. Most industries, with the exception of petroleum-based products, are resetting production rates to new levels to meet the emerging demand patterns as we weather the COVID-19 recession. View the complete study here. 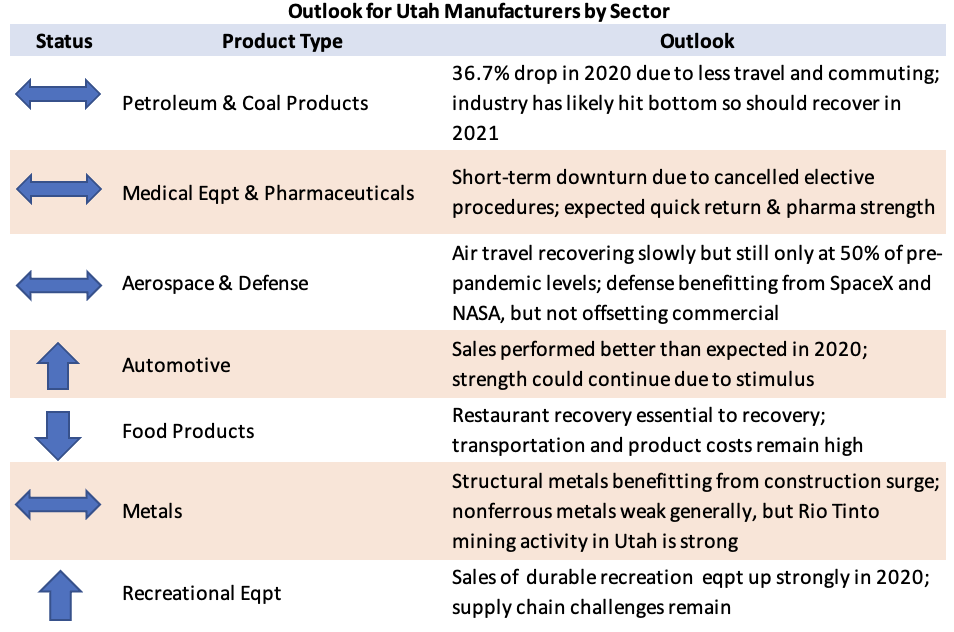 Utah’s manufacturers are positioned to have more favorable economic outcomes than originally forecast in Version 1.0 of Using Market Demand to Manage Production Levels [i]released in November 2020. Utah’s solid financial and economic footing, which were cited as assets in the initial forecast, have proven to provide a strong basis for the state’s economic performance in the latter half of 2020. 2020 UIRA Economic Impact Report[ii], found that Utah’s manufacturing industry contributes $12.7 million in additional tax revenues, 1,744 jobs, $87 million in additional employee wages, producing an economic total benefit of $341 million. Utah’s manufacturing sector is a key driver of our state’s economy.

Utah’s economic performance, combined with mostly positive economic activity and improvements in logistics over the same period nationwide, places Utah’s manufacturers in good position for further recovery and growth over the forecast period to 2025. Moreover, other factors with relation to the virus itself and public policy are moving in a direction that fosters a higher level of economic activity over the forecast horizon.

Most importantly, it is now expected that Utah manufacturers as a group could return to pre-COVID19 sales levels a year earlier than originally forecast, by late 2021 in the expected case and by 2022 in the more pessimistic low case. Version 2.0 of Using Market

Demand to Manage Production Levels estimates higher levels of GDP for the forecast scenarios over most of the individual years.

This study was conducted by Dr. Tulinda Larsen, Executive Director, Utah Advanced Materials and Manufacturing Initiative (UAMMI) and Mr. David Beckerman. Dr. Larsen has been a practicing economist for more than 40 years. She earned her B.A. and M.S. in Economics from The George Washington University and her Doctorate of Management from the University of Maryland Global Campus. Mr. Beckerman has been analyzing economic impacts on the aerospace industry for more than 30 years. He earned his B.A. from the University of Virginia and M.B.A. from Emory University – Goizueta Business School.